How to Prevent Red Eyes in Photos?

What are red eyes in Photos?

The simplest explanation I’ve come across is that red-eye is the reflection of light, in our case the flash, through the open retina of the eye. We’ve all seen its effects in the glowing red eyes of animals, kids and adults that have been captured on film using flash photography. Today you will learn everything you need to know about Why Red Eyes on Photos? How to fix them? Go ahead, read it.

Light rays travel through the cornea and pupil of the eye to focus on the retina, a layer of light-detecting cells at the back of the eye. From here, the retina converts the light rays into electronic pulses that travel along the optic nerve to the brain to create visual images. In fact, the eye works very similarly to the way a camera does. 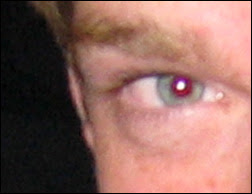 Light enters the clear covering of the eye, like the glass of a camera lens, and the pupil controls the amount of light that travels through the eye, like a camera aperture. The retina captures the incoming light and sends a record of it to the brain, like camera film. When a camera flash goes off, the pupils of your subject’s eyes don’t have time to constrict to reduce the amount of light entering their eyes. Therefore, a large burst of light reaches their retinas, reflects back, and is captured on film.

Eyes look red in photos due to the rich blood supply of the choroid, a layer of connective tissue at the back of the eye that nourishes the retina and gives it its normal red color. Does Turning Off the Flash reduce Red Eyes? Yes, if there is enough light in the room to take a picture without using the flash, you’ll avoid red eyes in photos.

How can prevent red eyes on photos?

1. Don’t look directly at the camera. Tell your subjects to look slightly away from the lens, so their eyes won’t catch the flash at a direct angle. This will reduce the likelihood of red eyes on pictures.

2. Make the room brighter. The darker the environment, the more dilated the subject’s pupils become, which increases the likelihood of red-eye in photos. Making the room less dim by turning on more lights can help eliminate red eyes.

3. Turn on the anti-red-eye function. Most modern cameras have this feature. Red-eye effect reduction functions emit short flashes of light in quick succession before the camera actually takes the picture.

4. The burst of light beforehand makes the subject’s pupils constrict, and there’s not enough time between flashes for them to re-dilate, thereby reducing the red-eye effect on photos.

5. Move the flash and the lens further apart. This method doesn’t work for internal-flash cameras, but if you have an SLR (single-lens reflex) camera, use an external flash that connects to your camera. Moving the flash further away from the camera body will prevent light reflecting from your subject’s pupils from entering the lens (it will reflect back toward the flash, not the lens), preventing the red-eye problem in photos.

6. Make sure your subjects aren’t drunk! We all know that people who have had one (or three) too many alcoholic drinks have slower reaction times. But did you know it also affects the response time of our eyes? Red-eye happens more often when you’re intoxicated because your pupils don’t close fast enough and let in too much light.

Q. How to fix a Red eye on the photo?

Digital photos: If you are using a digital camera, you can upload the photos to your computer and then edit out the offending red eyes with the “red-eye removal tool” in a picture-editing program. Some applications have a “drag and drop” feature where you can pick up a color from the iris of the eye and place it over the parts of the eyes appearing red; other programs automatically correct the offending red eyes for you.

Smartphone photos: Apps are available for Android, iOS (iPhone and iPad), and Windows phones that allow you to fix red eyes in photos. Basically, if a face is detected in a photo and there’s a red eye, you can use an auto-enhance tool to remove the redness and make the subject’s eyes appear more natural. Also, most image-editing apps have a tool that allows you to manually fix the red-eye problem on smartphone photos.

* Melanin absorbs light, so the more melanin you have, the less red light you will reflect back at the camera. Fair-skinned and blue-eyed people tend to have less melanin and typically have red eyes in photos more often than those with dark skin and brown eyes.

Previous article
What is ISO | How To Choose Better ISO Setting In-Camera
Next article
Nokia 2.2 launched in India